Reforesting the source of the San Francisco River

This river is of vital importance for several million riparian people living on its shores. It provides the agricultural, fishing, livestock and human water requirements which must remain a key priority. Its originates in the Minas Gerais Serra da Canastra mountains and flows into the Atlantic Ocean after crossing five Brazilian states.

Its many sources and  tributaries suffer the effects of deforestation which has negative consequences on the global water volume of São Francisco river.

Our project consists of planting trees around the source of the San Francisco River and educating the youth, specifically school aged children, about the importantance of reforestation.  The project was initiated in 2005 by five neighboring municipalities.  The buzz generated by its success lead to thirty other towns applying to join the project.

To date, we have planted one million trees around the springs and riverbanks of the San Francisco River with the help of local authorities.

Currently, a change in attitude has enabled numberous partnerships to form and unite behind the same cause of restoring the health of their river.  Environmental awareness programs for teachers

We have planned a major projects to reforest the sources of the Rio Grande River, which originates in the mountains of Minas Gerais and flows south towards Paraguay and Argentina.

Millions of people depend on this river in these three countries all the year around. 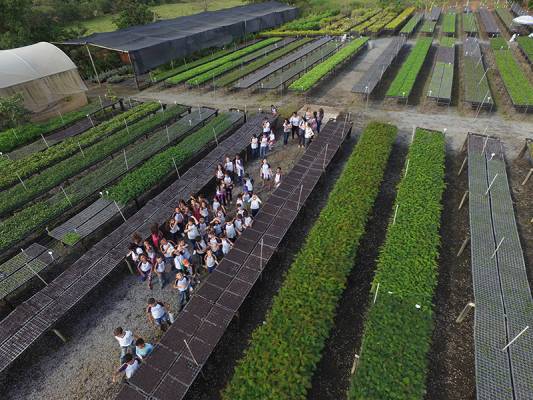