Before European colonization, there existed primitive rainforests so immense that they defied human imagination.

The largest of these forests, the Amazon – named after the river that crosses it from beginning to end – has become an emblem for tropical forests in the world.

Covering a surface of 4,500,000 square kilometers, the Amazonian forest extends way beyond the boundaries of Brazil, spreading west into the foot-hills of the Andes and north to the shores of the Caribbean Sea.

The second biggest forest area, much less known to the general public, is called the Atlantic Forest. Its surface covered 1,1 million square kilometres during the 15th century, extending almost 4,000 km down to the Atlantic Ocean coastline from Bélem to São Paulo.

This Atlantic Forest has greatly suffered from the deforestation caused by agriculture and breeding. Today, only a tiny percentage of its initial surface remains : according to latest estimates only 5% survive, which falls to 1% for the Noreastern region.

The Federal Biological Reserve of Pedra Talhada, which belongs to this Atlantic forest, spreads over approximately 50 km², covering the municipalities of Quebrangulo, Chã Preta, Lagoa do Ouro, and Corrente (States of Alagoas and Pernambuco).

It is the last forest of this magnitude in the region.

Seen from above,  the Pedra Talhada Reserve seems composed of a dense and uniform vegetation, apart from the eroded granite cliff that has given its name to the place: “Pedra Talhada” (Carved Stone).

In reality, this forest is not a homogenous entity. On the contrary, it is a juxtaposition of a multitude of ecossitems, each occupying a specific ecological habitat.

This fact is experienced when entering the forest as notable differences appear in the landscapes and flora. The visitor penetrating the reserve is immediately confronted to a very steep slope that has protected the forest from exploitation. At the border of the forest, sunrays are still visible through the branches, but these shafts of light crossing the foliage disappear as one enters the dark forest.

The climate of Pedra Talhada is marked by two distinct seasons:

In general, the climate of the region is tropical and humid with a dry summer.

The richness of its biodiversity – animal and vegetal – is due to following essential factors:

Thanks to this exceptional climatic and geological situation, one can find hundreds of species of trees in every hectare of the forest. There are also many species of mammals, birds, reptiles, amphibians, fishes, snails, insects, and spiders. Dozens of these species are endemic, which means they are found only in this forest.

It is important to note that in Brazil, 22 out of the 227 bird species in danger of extinction have been observed in this small 50 km2 massif. Thus, this small forest reserve alone shelters about 10% of all the endangered birds on the Brazilian subcontinent. 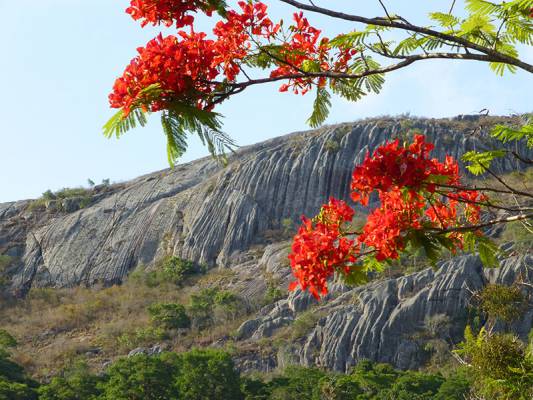