The Lear’s Macaw is the most endangered parrot in the world. It survives only in a small area in the north of the state of Bahia. Its numbers had fallen to less than 500 individuals, which was an extremely critical threshold. Thanks to an important protection system, its population has risen to about 750 individuals, according to the June 2008 census. Today, it seems that its population is estimated at about 1’000 Macaws, which is very encouraging but insufficient to remove it from the red list of endangered species.

As with the Hyacinth Macaw, we have set up three bird nurseries and developed a plan to plant and protect native palms of the “Licuri” family, whose seeds constitute an essential part of their diet.

In order to involve the local population in this endeavor, we have set up a strategy to alleviate the extreme poverty of the local inhabitants by directly remunerating the families who plant the trees and commit to taking care of them for at least four years. 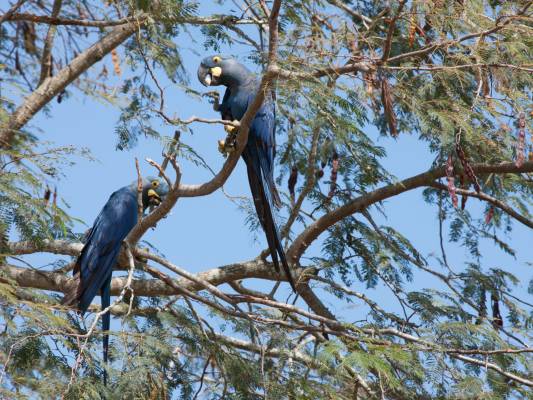